For the use of a Registered Medical Practitioner or a Hospital or a Institution only.

AN ANTICHOLINESTERASE AGENT
The symptomatic control gravis of myasthenia when oral therapy is impractical
The prevention and treatment of postoperative distention and urinary retention after mechanical obstruction has been excluded
Reversal of effects of nondepolarizing neuromuscular blocking agents (e.g. tubocurarine, metocurine, gallamine or pancuronium) after surgery
DESCRIPTION :

STRUCTURAL FORMULA :
Its structural formula is :

ACTIONS :
Neostigmine inhibits the hydrolysis of acetylcholine by competing with acetylcholine for attachment to acetylcholinesterase at sites of cholinergic transmission. It enhances cholinergic action by facilitating the transmission of impulses across neuromuscular junctions. It also has a direct cholinomimetic effect on skeletal muscle and possibly on automatic ganglion cells and neurons of the central nervous system.

PHARMACOKINETICS :
Following intramuscular administration, neostigmine is rapidly absorbed and eliminated. In a study of five patients with myasthenia gravis, peak plasma levels were observed at 30 minutes and the half-life ranged from 51 to 90 minutes. Approximately 80 % of the drug was eliminated in urine within 24 hours; approximately 50 % as the unchanged drug and 30 % as metabolites. Following intravenous administration, plasma half-life ranges from 47 to 60 minutes have been reported with a mean half-life of 53 minutes. Neostigmine undergoes hydrolysis by cholinesterase and is also metabolised by microsomal enzymes in the liver. Protein binding to human serum albumin ranges from 15 to 25 %. The clinical effects of neostigmine usually begin within 20 and 30 minutes after intramuscular injection and last from 2.5 to 4 hours.

Blockade :
Usually, reversal of neuromuscular blockade with NEOSTIGMINE  METHYLSULFATE  INJECTION  USP should not be attempted until spontaneous recovery from paralysis is evident. It is recommended that the patient be well ventilated and patent airway maintained until complete recovery of normal respiration is affirmed.

Children :
The suggested dose in children is 0.05 mg/kg/dose and atropine sulphate 0.02 mg/kg/dose by slow I.V. injection. Maximum recommended dose of neostigmine in children is 2.5 mg. The neostigmine and atropine are often given simultaneously, but in patients with bradycardia, the pulse rate should be increased to about 80 beats/minute with atropine before administering neostigmine. The speed of recovery from neuromuscular blockade is primarily determined by the intensity of the block at the time of antagonism. It is also influenced by other factors including the presence of drugs (eg. anaesthetic drugs, antibiotics and antiarrhythmic drugs) and physiological changes (eg. electrolyte and acid-base imbalance, renal impairment). These factors may prevent successful reversal with NEOSTIGMINE  METHYLSULFATE  INJECTION  USP or lead to re-curarisation after apparently successful reversal. It is imperative that the patients should not be left unattended until these possibilities have been excluded.

Myasthenia Gravis :
Adults :
1 mg to 2.5 mg given I.M. or S.C. at intervals throughout the day when greater strength may be needed (e.g. mornings and before meals) given a total daily dose of 5 to 20 mg. Duration of action of a single dose is 2 to 4 hours.

Neonates :
0.05-0.25 mg I.M. every 2-4 hours, half an hour before feeding. Treatment is not usually required beyond 8 weeks of age. Because the condition is usually self limiting the daily dosage should gradually be reduced until the medicine can be withdrawn. When large doses of neostigmine are given to myasthenic patients, atropine sulphate may be required to counteract the muscarinic side effects.

Urinary Retention :
Prophylaxis :
0.25 mg S.C. or I.M. before or immediately after the operation, repeated every 4 to 6 hours for 2-3 days.

Treatment :
0.5 mg S.C. or I.M. and apply warmth to lower abdomen. After patient has voided continue 0.5 mg S.C. or I.M. every 3 hours for at least 5 injections. If there has been no urinary response within one hour of the first dose, the patient should be catheterised.

WARNINGS :
Neostigmine should be used with caution in patients with epilepsy, bronchial asthma, bradycardia, recent coronary occlusion, vagotonia, hyperthyroidism, cardiac arrhythmias or peptic ulcer. When large doses of neostigmine are administered, the prior or simultaneous injection of atropine sulfate may be advisable. Separate syringes should be used for the neostigmine and atropine. Because of the possibility of hypersensitivity in an occasional patient, atropine and antishock medication should always be readily available.

PRECAUTIONS :
Neostigmine is contraindicated in patients with mechanical intestinal or urinary tract obstruction or peritonitis. It should be used with extreme caution in patients who have undergone recent intestinal or bladder surgery and in patients with bronchial asthma. It should be used with caution in patients with cardiovascular disorders including arrhythmias, bradycardia, recent myocardial infarction and hypotension, as well as in patients with vagotonia, epilepsy, hyperthyroidism, parkinsonism, renal impairment, or peptic ulcer disease. When neostigmine is given by injection, atropine should always be available to counteract any excessive muscarinic reactions; atropine may also be given before or with neostigmine to prevent or minimise muscarinic side-effects but this may mask the initial symptoms of overdosage and lead to cholinergic crisis.

The UK manufacturer has advised that as the severity of myasthenia gravis often fluctuates considerably during pregnancy, particular care is needed to avoid cholinergic crisis caused by overdosage; it has also been reported that neonatal myasthenia may follow large doses during pregnancy. The amount of neostigmine distributed into breast milk is very small but breast-fed infants need to be monitored. Large doses of neostigmine by mouth should be avoided in conditions where there may be increased absorption from the gastrointestinal tract. It should be avoided in patients known to be hypersensitive to neostigmine.

Nonteratogenic effects :
Anticholinesterase drugs may cause uterine irritability and induce premature labor when given intravenously to pregnant women near term.

Nursing mothers :
It is not known whether neostigmine is excreted in human milk. Because many drugs are excreted in human milk and because of the potential for serious adverse reactions from neostigmine in nursing infants, a decision should be made whether to discontinue nursing or to discontinue the drug, taking into account the importance of the drug to the mother.

Paediatric use :
Safety and effectiveness in children have not been established.

INTERACTIONS  AND  INCOMPATIBILITIES :
Drugs with neuromuscular blocking activity, such as the aminoglycosides, clindamycin, colistin, cyclopropane, and the halogenated inhalational anaesthetics, may antagonise the effects of neostigmine. A number of drugs, including quinine, chloroquine, hydroxychloroquine, quinidine, procainamide, propafenone, lithium, and the beta blockers, that have the potential to aggravate myasthenia gravis can reduce the effectiveness of treatment with parasympathomimetics. Prolonged bradycardia has also occurred in patients receiving beta blockers when given neostigmine. Anticholinesterases, such as neostigmine, can inhibit the metabolism of suxamethonium and enhance and prolong its action. Ophthalmic use of anticholinesterases, such as ecothiopate, should be undertaken with care in patients receiving neostigmine systemically for myasthenia gravis, because of possible additive toxicity. Antimuscarinics such as atropine antagonise the muscarinic effects of neostigmine.

Beta blockers :
There have been several reports of bradycardia and hypotension when neostigmine or physostigmine were given to patients receiving beta blockers but no significant changes in heart rate were noted in a study of pyridostigmine given to 8 patients taking beta blockers. Beta blockers have the potential to aggravate the symptoms of myasthenia gravis and may therefore reduce the effectiveness of parasympathomimetic treatment.

Corticosteroids :
Although use of glucocorticoids alone may improve strength in myasthenic patients, use of methylprednisolone in patients receiving neostigmine or pyridostigmine has exacerbated symptoms and produced profound weakness needing assisted ventilation. Since the adverse effects of combined therapy usually occur before any expected benefits it has been suggested that the glucocorticoid should be given on alternate days in small doses which are increased gradually until the optimal effect is achieved.

SIDE  EFFECTS :
Adverse reactions generally associated with neostigmine overdosage are :

OVERDOSAGE :
Overdosage with neostigmine can cause cholinergic crisis, which is characterised by increasing muscle weakness. Myasthenic crisis is due to an increase in severity of the disease and may be difficult to distinguish from cholinergic crisis on a symptomatic basis. Cholinergic crisis can lead to respiratory paralysis, which may result in death, while myasthenic crisis is extreme muscle weakness. The differentiation between the two crises is extremely important as treatment is different for each. The two types of crises can be differentiated by the use of edrophonium and clinical judgement. The LD50 of the neostigmine methylsulfate in mice is 0.3 ± 0.02 mg/kg intravenously, +0.54 ± 0.03 mg/kg subcutaneously and 0.395 ± 0.025 mg/kg intramuscularly; in rats the LD50  is 0.315 ± 0.019 mg/kg intravenously, 0.445 ± 0.032 mg/kg subcutaneously and 0.423 ± 0.032 mg/kg intramuscularly.

TREATMENT  OF  OVERDOSAGE :
The treatment of cholinergic crisis requires the discontinuation of all cholinergic medication. The immediate use of atropine is also recommended, muscarinic effects are controlled with I.V. atropine sulfate (1 to 2 mg) followed by I.M. atropine sulfate every 2 to 4 hours. Assistance of ventilation may be required if respiration is severely depressed.

PHARMACEUTICAL  PRECAUTIONS :
Parenteral drug products should be inspected visually for particulate matter and discoloration prior to administration, whenever solution and container permit.

SHELF  LIFE :
24 months from the date of manufacture.

PRESENTATION :
NEOSTIGMINE  METHYLSULFATE  INJECTION  USP is supplied as per below table : 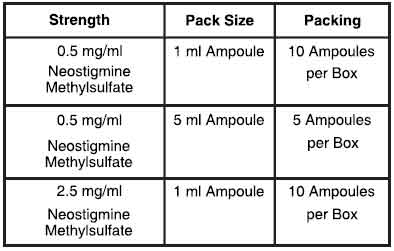 Disclaimer : For the use of a Registered Medical Practitioner or a Hospital or a Institution only. Also it is not intended to be used by healthcare professionals or patients for the purpose of prescribing or administering these products. Questions regarding the complete and current content of product labeling / specification / presentation should be directed to SGPharma.